The Devil's Run: Route 666 is a 20mm-scale post-apocalyptic vehicular combat board game from Word Forge Games.

Devil's Run is firstly, a 'pick-up and play' board game that can be played quickly over a beer or a soda for a hour or so between a couple (or gang) of mates. Then secondly, as an in depth gaming experience, where people can build a gang of weird and wonderful vehicles and a narrative campaign of sagas and developing characters. It is important to us that people convert and create, that is why we have made this a 20mm scale game, meaning people can include their conversion of for example, Hot Wheels or Matchbox cars and a whole plethora of Devil's Run character models. We are so passionate about the use of conversions that we have produced conversion kits of wheels, weapons and armours. 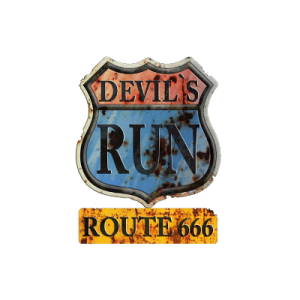 Retrieved from "https://devilsrun.fandom.com/wiki/Devil%27s_Run,_Route_666:_Unofficial_Wiki?oldid=6905"
Community content is available under CC-BY-SA unless otherwise noted.